One of the weirdest stories in college football over the last decade was the case of former Florida State quarterback Jameis Winston shoplifting crab legs. Tim Tebow's Heisman rap video was harmless and awkward, but this takes the cake in bizarre moments.

That is the first time that sentence has ever been said in the history of the world. I know in 2022 we joke about having "Weird Year Bingo Cards", but no one on the face of the earth in 2014 had "Heisman-winning QB steals crustaceans from Publix." No way. "NBA Player orchestrates trade to send away first-overall pick" or "Kansas City Royals host MLB World Series Game 7" seems way tamer than this and those actually happened. If you get that card, you're handing it in. Can't win with that nonsense.

Never in my life have I ever thought about stealing crab legs and crawfish, and I'm not a Heisman Trophy winner. And with that said, let's dive into the insanity that became a meme.

"As reported in the news, last night I received an adult civil citation for petty theft from a local supermarket. I went to the supermarket with the intent to purchase dinner but made a terrible mistake for which I'm taking full responsibility. In a moment of youthful ignorance, I walked out of the store without paying for one of my items."
-- Jameis Winston, h/t Pro Football Talk

About 10 months after the incident, he changed his story. In an interview on ESPN's Draft Academy with Michigan coach Jim Harbaugh on the Tuesday night before the 2015 NFL Draft, the first-overall pick by the Tampa Bay Buccaneers claimed it wasn't an accident.

Apparently about a week before taking the crab legs, a Publix employee told Winston he could take a birthday cake he was there to pick up, and the employee would "hook him up" with free food whenever he went to the store.

"Well, a week before, it was my buddy's birthday and we had got a cake. And we met a dude that worked inside Publix and he said, 'Hey, anytime you come in here, I got you.' So that day we just walked out and he hooked us up with that. When I came in to get crab legs, did the same thing, and he just gave them to me, and I walked out."
-- Jameis Winston in ESPN Draft Academy interview

If this is the case, it isn't something anyone knew about because not even Seminoles head coach Jimbo Fisher knew about this at the time, which is something I would think Winston would mention when meeting with his coach.

"I had no knowledge of it until I came in this morning. But FSU, we did make contact with Publix back then to make sure there was nothing going on."
-- Jimbo Fisher during a 2015 ACC Teleconference

Publix apparently looked into a store employee giving away food to Winston, but they reported to the sheriff's office they found nothing that could confirm the truth behind Winston's statement.

The Heisman Trophy winner was playing on the Florida State baseball team at the time and was suspended by coach Mike Martin for the citation. He was reinstated five days later after completing his hours of community service.

This wasn't the first time, nor the last, that Winston ran into trouble during his time in college. 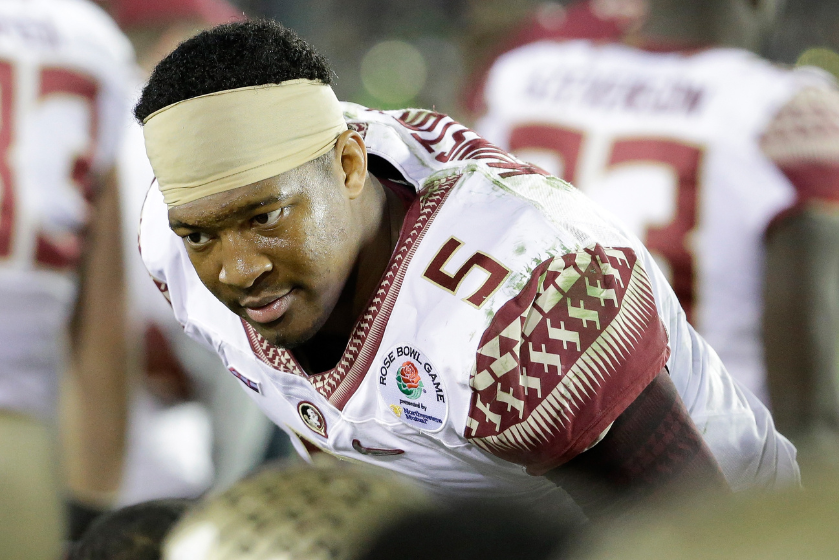 Winston and his roommate, FSU defensive end Chris Casher, were reported to be shooting pellet guns at squirrels. Police approached the two with guns drawn and handcuffed them, but they were released without charges being filed.

Later in the night, Winston, Casher, Mario Edwards and P.J. Williams took part in a pellet and B.B. gun battle, causing $4,000 in damages at their apartment building. Management didn't press charges because an FSU official promised they would pay back the building for the damages caused.

A woman accused Winston of raping her in his apartment, after which she immediately reported the incident to the police. Five weeks later, she reached out to investigators and told them it was Winston who had committed the assault after recognizing him on campus. Charges were dismissed by Tallahassee Police after saying the accuser wasn't cooperating.

The investigation continued nine months later, but was dropped again when it was decided there wasn't enough evidence. It was investigated by the NCAA and Department of Education for nearly two years and became a major controversy during Winston's Heisman season.

Winston was accused by a Burger King employee of entering the store and began filling up empty ketchup cups with soda without paying, even after being told not to.

The store manager dropped the case and no charges were filed.

Winston was absent from a code-of-conduct hearing on Florida State's campus with Casher and Ronald Darby, who supposedly witnessed parts of the sexual encounter with the woman who had accused Winston of rape. He claimed no one had told him he needed to be there, and it was decided they could not do anything to force him to attend the hearing.

Winston jumped onto a table in a campus building on September 16, 2014 and yelled "F*** her in the p****." The whole thing was seen by multiple students and led to Fisher suspending him for the first half of the team's game against the Clemson Tigers. The wild episode was made into a meme on social media.

During his time in the NFL, the former Bucs QB was suspended three games during the 2018 season after he "violated the Personal Conduct Policy by touching the [Uber] driver in an inappropriate and sexual manner without her consent."

It's getting more difficult to remember the New Orleans Saints signal caller's good moments on the gridiron. On top of being benched behind Taysom Hill last year, the "eating the W" speech is another addition to his odd collection of moments that overshadow playoff performances or explosions against the Miami Dolphins, Jacksonville Jaguars and New York Jets.

Winston's troubles off the field are well-documented, and it, unfortunately, put a stain on his college football career. 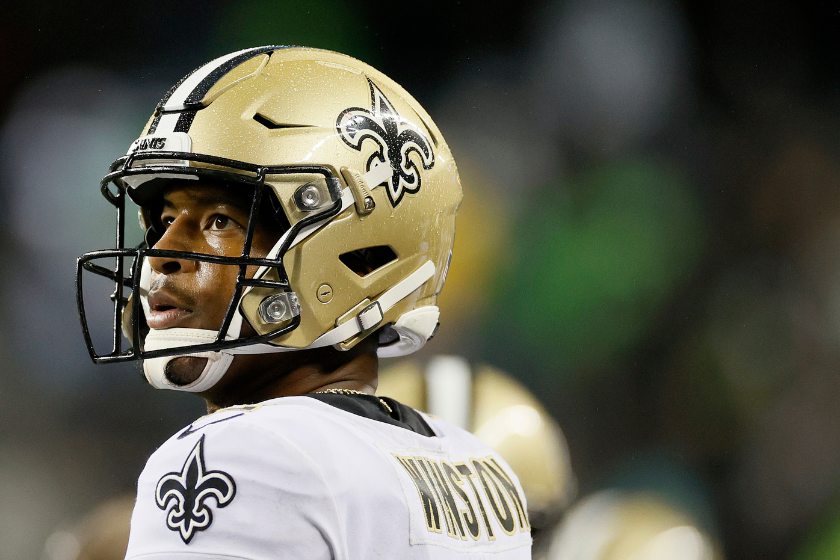 Counterpoint: this is the exact thing that makes him the perfect New Orleans Saints quarterback. Sure, Drew Brees is kind and sweet, but Jameis has Bourbon Street written all over him. Seriously. Stealing crab legs from a supermarket is Mardi Gras behavior. While we can't say for sure if that's the reason he's heading into training camp as the Saint's QB1, it's definitely not NOT the reason.

Who knows, maybe the Saints see value in a player who can "steal" crab legs and crawfish. Maybe that's the kind of leader they want under center.

This article was originally published June 12, 2019.