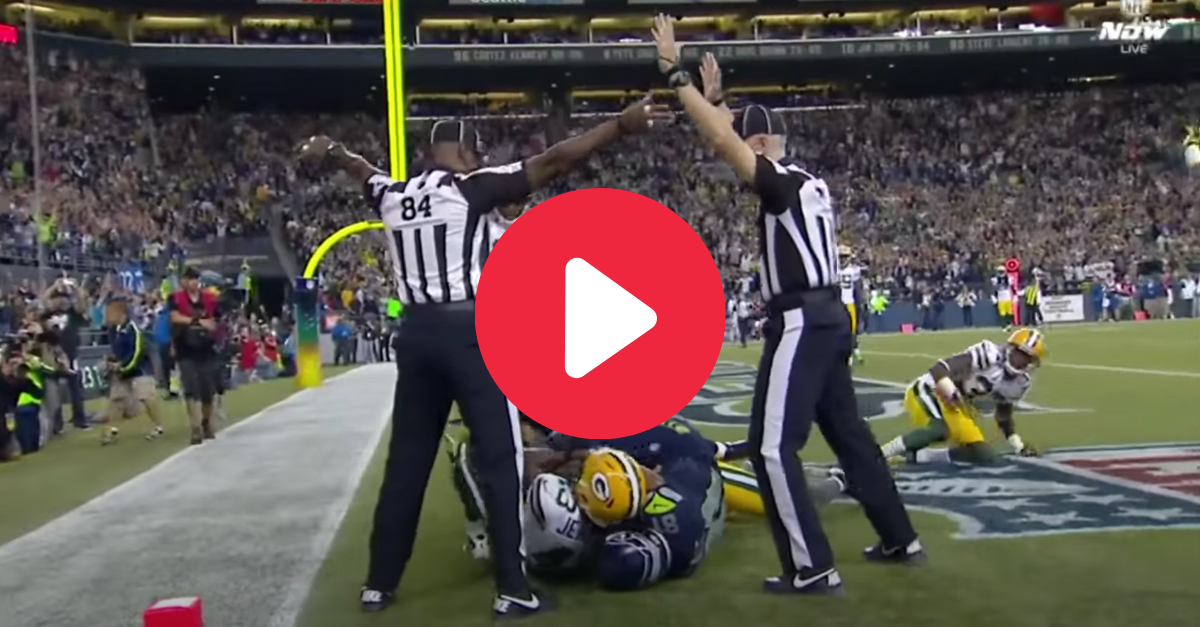 The job of an NFL referee is a hard, but financially rewarding one. Split-second calls in the end zones, pass interferences on the sidelines and everything in-between take a pair of trained eyes to make, and many times they’re incorrect anyway.

The 2012 NFL season was an avalanche of crappy officiating. A referee lockout that took place from June 2012 to late September 2012 meant the league had to use replacement officials. There were 112 of them, to be exact. The group included retired referees, high school referees, and a man who officiated a JV game shortly afterward, according to ESPN.

This idea was bound to fail from the start, and what transpired at the end of the Seattle Seahawks-Green Bay Packers game that season was a microcosm of the lockout.

Call it the “Fail Mary” or the “Inaccurate Reception” or the “Intertouchdownception,” but this play was as bonkers as any in NFL history.

RELATED: How Much Do NFL Referees Make?

The NFC West’s Seahawks and NFC North’s Packers squared off in a Monday Night Football matchup on September 24, 2012 at CenturyLink Field, and it turned out to be a low-scoring affair by both NFL teams.

Aaron Rodgers‘ squad led 12-7 late in the fourth quarter, and Seahawks rookie quarterback Russell Wilson needed to drive down the field for a touchdown. On fourth-and-10 at the 24-yard line with eight seconds to go, Wilson scrambled around and heaved a Hail Mary prayer toward the back of the end zone.

Players from both teams leapt for it, but it was Packers safety M.D. Jennings and Seahawks wide receiver Golden Tate who got their hands on the ball. As they both fell to the ground wrestling for the football, that’s when things got tricky.

After a replay review, referee Wayne Elliott told everyone in the stadium the call stood after not having enough evidence to overturn it. Seahawks head coach Pete Carroll raised his arms in celebration and the Packers lost what felt like a game stolen from them.

The fallout was enormous and embarrassing for the NFL. Not only did referees potentially make the wrong call, they also missed a pass interference when Tate, who went on to play for the Detroit Lions and New York Giants, pushed Green Bay cornerback Sam Shields just before going up for the ball.

Both teams wound up losing in the NFC Divisional Playoff round. Green Bay fell to the San Francisco 49ers at Candlestick Park, and Seattle’s season was ended by the Atlanta Falcons in the Georgia Dome. The 49ers won the NFC Championship game but lost to the Baltimore Ravens in the infamous power outage Super Bowl.

?It?s almost like a funeral,? Easley told Yahoo! Sports. ?In the days around it you have a lot of support and you make it through. But as time goes by, you still have to process [the loss of a loved one].?

Easley didn’t just hear it from Seahawks and Packers fans. Everyone from players to coaches and even Barack Obama chimed in to criticize the call.

Nearly two years after the infamous Fail Mary, Easley checked into a mental health rehab center. He was on medical leave from his job at Bank of America. He told Yahoo! Sports that he even separated from his wife of 28 years.

Eight years later, Easley posts on his Facebook often. He underwent surgery for colon cancer in January. On the anniversary of that memorable final play, he posted about it on his social media profile.

Hopefully, we can all look back on the Inaccurate Reception with some good laughs.