As for hitters, Bryce Harper and Carlos Correa are guys you build a team around. Generational talents like Alex Rodriguez and Ken Griffey Jr. are dream scenarios for their rare combination of speed, power and hitting and fielding ability.

The 2020 MLB Draft may not have a Ken Griffey Jr., but it does have a kid who has already broken one of Barry Bonds' records. Arizona State's Spencer Torkelson set the NCAA on fire, and now he's primed to be one of the most-hyped first overall picks since Bryce Harper.

Who is Spencer Torkelson?

You can't spell USA without ASU! ?

The accolades continue to grow for Spencer Torkelson, who has been selected to join the @USABaseballCNT this summer!

Born in Petaluma, California, 20-year-old Spencer Torkelson easily could've been drafted out of Casa Grande High School. There, the three-sport star hit .430 with 11 home runs and 99 RBIs as a third baseman. He then committed to Arizona State University.

Torkelson was nowhere near the prospect he is today. Arizona State was happy to have him as a corner infielder, but the coaching staff had no clue what their newest power hitter was going to accomplish his freshman season in Tempe.

ASU hitting coach Michael Earley remembers being in awe when he laid eyes on his swing.

"Coming in, I didn't hear that much about him," Earley told Baseball America. "The first day he hit, I was like, 'Oh my gosh, this dude could be unbelievable.' Every day, I became more and more impressed."

He Broke One Of Barry Bonds' Records

"I think my biggest memory was just going to Giants games and the buzz with everyone was about Barry and he was going to hit a home run," Torkelson told Baseball America. "It's just what you expected him to do every game. It was all the hype around Barry. I specifically remember going to games and going, 'Oh yeah, Barry's gonna hit one into McCovey Cove today.'"

Years later, Torkelson and Bonds were mentioned in the same sentence in headlines.

As a freshman at Arizona State in 2018, the right-handed slugger hit 25 home runs. That mark didn't just break Bonds' freshman home run school record of 11 dingers, it more than doubled it. Torkelson led the nation and set a Pac-12 record for home runs by a freshman as well.

Bonds' freshman record stood since 1984 before the 18-year-old first baseman came along and shattered it.

Arizona State's list of MLB alumni is as impressive as any school in the country. Barry Bonds, Reggie Jackson, Dustin Pedroia, Bob Horner and Rick Monday all were Sun Devils at one point.

Torkelson will go down as one of the best.

He had little trouble in the Cape Cod summer league, too, hitting .340 with nine homers in 30 games across two seasons.

Once the rest of the 2020 NCAA season was officially canceled on March 12, Torkelson stayed in Arizona to work out and hit the batting cage daily. When the school completely shut down, he headed back home to California, where he'd begin his wait to hear his name called in the 2020 MLB Draft.

"I can't cuss in the media. But it would be like, you're something -- I don't know, you put those little dashes and number signs and exclamation points -- crazy if you don't take him number one," ASU head coach Tracy Smith told ArizonaSports.com.

What Scouts Are Saying About Torkelson 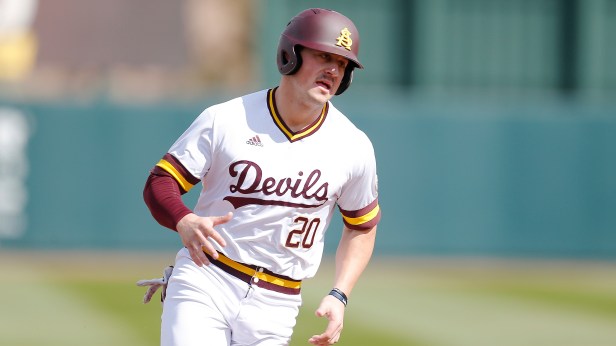 Torkelson isn't some massive, muscular freak at the plate.

He stands a well-built 6-foot-1 and 220 pounds. But it's his bat speed and tremendous hands that allow him generate power like no one else in college baseball. Whether or not he can field well enough to stay at first base doesn't matter, because any team in Major League Baseball would jump at the chance to draft him for his bat.

Here's what the industry experts are saying about Torkelson.

MLB.com: As a right-handed first baseman who can really hit and who wasn't drafted out of high school, Torkelson draws invariable comparisons to Andrew Vaughn, the Cal standout who was the No. 3 pick in the 2019 Draft. He controls at-bats extremely well and draws a ton of walks. He's able to drive the ball from foul pole to foul pole and he uses the middle of the field when he's at his best. He's able to hit the ball out to all fields, with tremendous loft power to his pull side. He doesn't sell out for that power, but gets to it with ease.

ESPN: Scouts love his plus-plus raw power, his advanced approach and his bat speed, all of which have allowed him to display power to all fields. He's an above-average defender at first base and athletic enough that he has played a little outfield as well. To top it off, he's young for his draft class, not turning 21 until late August.

Spencer Torkelson in the MLB Draft

Junior @ASU_Baseball 1B Spencer Torkelson hit 21 homers and slashed .359/.454/.714 in his junior season. The ultra-athletic slugger is primed to be near the top of the 2020 amateur draft.

Torkelson is the odds-on favorite to hear his name called when commissioner Rob Manfred announced the Detroit Tigers' No. 1 pick on June 10.

Most publications, like MLB.com, Baseball America and The Athletic, have crafted MLB mock drafts with Torkelson locked in at the top. Perfect Game rates the ASU slugger second in its draft prospects behind Vanderbilt infielder Austin Martin.

What's difficult about drafting Torkelson so high is that he's a first baseman. Teams generally don't take these positional players at 1:1 because it means they have to hit well to become successful MLB players. Top-of-the-round picks are usually either pitchers or athletic shortstops that can play other positions if need be, like Royce Lewis, Dansby Swanson and Alex Bregman (who was the No. 2 pick in 2015).

ESPN noted that only three first basemen over the past 20 years have gone in the top-five: Adrian Gonzalez (2000), Eric Hosmer (2008) and Andrew Vaughn (2019). Additionally, 24 first basemen were drafted in the first round from those two decades. Only two of them became bona fide stars: Gonzalez and Prince Fielder.

Still, the Tigers likely won't be able to pass up on Torkelson's hitting prowess. He played third base in high school and could probably transition to an outfielder, so he's not exactly Prince Fielder. He should advance quickly through the minor leagues if his freshman season or last year are any indication.

Detroit took pitcher Casey Mize No. 1 overall two drafts ago, now it's time to go get a big-time power hitter. Considering Torkelson's done nothing but hit home runs everywhere he plays, the Tigers should have a no-brainer on their hands.