10 Big and Bold Predictions for the 2019 College Football Season 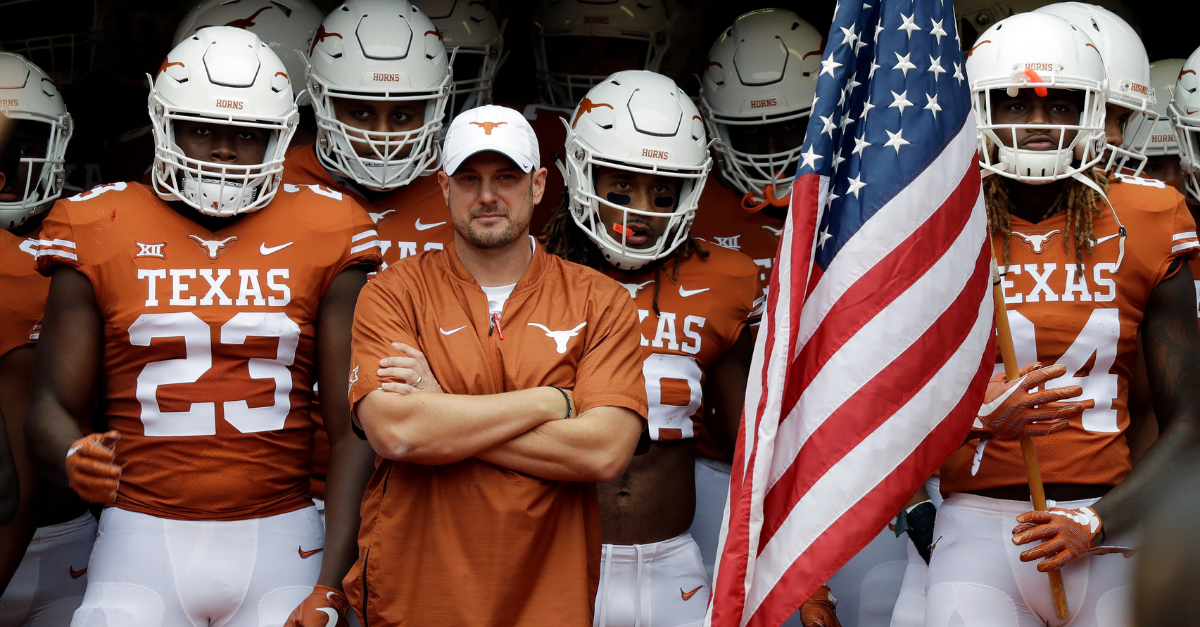 The Clemson Tigers and rising superstar quarterback Trevor Lawrence are the kings of college football after beating the Alabama Crimson Tide into a pulp in the College Football Playoff National Championship game. While another season gets smaller in the rear-view mirror, the 2019 season ahead starts to peak over the horizon.

Programs like the Miami Hurricanes and Auburn Tigers, who were ranked No. 8 and 9 in the preseason AP Poll, respectively, fooled us into thinking they were contenders. Wisconsin running back Jonathan Taylor started the season as the favorite to win the 2018 Heisman Trophy, but he only earned one first-place vote in the end as Kyler Murray captured the honor. We don’t know exactly what will happen next season, but here are 10 bold predictions to get your juices flowing for 2019:

No one’s really been able to figure out Lincoln Riley‘s offense in Norman the last two seasons. Alabama jumped out to an early lead before the Sooners stormed back in last year’s Orange Bowl, but besides that, only Texas’ offensive outburst in the Red River Rivalry was able to knock them off.

That is, until new head coach Dana Holgorsen and the Houston Cougars come to town.

Holgorsen, who previously coached at West Virginia and nearly beat Oklahoma last season, loads up Houston’s aerial attack on the arm of senior quarterback D’Eriq King. The Sooners will be caught in transition on offense and their defense will unravel when Houston steals a win on opening weekend in Norman.

For the five seasons that James Franklin‘s been at the helm in State College, Pennsylvania, the Nittany Lions really don’t have much to show. Back-to-back 11-win seasons in 2016 and 2017 look good, but with only two postseason wins ? the 2014 Pinstripe Bowl and 2017 Fiesta Bowl ? Franklin’s seat is starting to warm.

Franklin signed a three-year extension in 2017 to keep him with the program through 2022, but there have been multiple rumors circulating that the fan base is growing tired of the team not getting over the hump. Also, Franklin was tied to rumors of becoming the USC Trojans next head coach. Not only that, but Penn State had the most players in the NCAA Transfer Portal at the end of January.

If Southern California struggles once again in 2019 under Clay Helton, they’re going to pay a king’s ransom to pull Franklin to the West Coast.

3️⃣0️⃣0️⃣ total yards, SEVEN times in one season.@MartinezTheQB is the first Husker QB to ever pull it off.

After losing their first six games to start new head coach Scott Frost’s tenure, the Cornhuskers went on to win four of their last six, which included a five-point loss on the road to Ohio State and a three-point road loss to Iowa.

In 2019, the Cornhuskers and quarterback Adrian Martinez are going to break through.

Nebraska’s most difficult opponents in 2019 include Ohio State, Wisconsin and Iowa, all of which are home games, and their hardest road tests are at Colorado, Minnesota and Purdue. That looks like at least nine regular season wins to me, plus a bowl game to bring Nebraska back into the national conversation.

#NotreDame was fortunate to return as much of its defense as it did in 2018. Next season will be a very different task … https://t.co/DkFbmS5nMa

Last season might have looked great most of the way, but the absolutely drubbing the Fighting Irish had at the hands of Clemson in the Cotton Bowl was downright dreadful to watch. Expect Notre Dame to take a step back in 2019.

The Irish want to play an FBS Independent schedule, and they certainly didn’t make their upcoming year easy. Road games against Georgia, Michigan and Stanford are on the table, plus they’ll have to play a fiesty Virginia Cavaliers team that won eight games in 2018, as well as USC, Virginia Tech and Boston College.

Things won’t be so perfect this time around for Brian Kelly‘s team, and they’re going to finish in the middle of the pack in 2019.

For the first time since 1999, we finished the season tops in the nation in total defense‼️#HaiIState🐶 pic.twitter.com/xN4EpYmXkS

Under first-year head coach Joe Moorhead, the Bulldogs finished the 2018 season with ranked No. 1 in the nation in total defense (263.1 YPG) and second in scoring defense (13.2 PPG). Their five losses came against Kentucky, Florida, LSU and Alabama ? all of which finished the year ranked in the top-12 ? plus a bowl game loss to the Iowa Hawkeyes, 27-22.

Joe Moorhead is an offensive coach. With a defense like this, wait until he actually gets his own players in his system.

In 2019, the Bulldogs only play four true road games, the most difficult of which will be at Texas A&M late in October. With LSU and Alabama both traveling to Starkville, and with quarterback Keytaon Thompson taking over the offense, Mississippi State will be ringing those cowbells all the way to a New Year’s Six bowl game. Plus, playing in the SEC is always a resume booster.

The biggest transfer of the offseason was Alabama’s Jalen Hurts heading to join the Oklahoma Sooners. With all the fanfare and Heisman Trophy hype coming with him, there’s one big thing that everyone seemed to forget: Spencer Rattler is now an Oklahoma Sooner.

The top-ranked quarterback in the country is headed to Norman next year, and this kid is legit. The Arizona native threw for more than 11,000 yards in his high school career and tossed two touchdowns at the Under Armour All-American Game.

This is a quarterback controversy waiting to happen. If Hurts struggles in Oklahoma’s fast-paced offense, Rattler is going to pull a Trevor Lawrence and usurp his upperclassmen teammate before the midway point in the season.

The Army Black Knights won 11 games for the first time in school history last year, but it’s no fluke. Head coach Jeff Monken led this team to back-to-back 10-win seasons for the first time ever, and they’re poised to shake up the college football landscape once again.

Army is bringing in their highest-rated recruiting class in a long time next season, which signals the permanent shift that’s happening at West Point. Plus, their most difficult game is on September 7 at Michigan. Besides that, Army can easily run the table the entire season and be ranked high enough to earn a coveted New Year’s Six bowl game.

The Alabama Crimson Tide are the cream of the crop year after year. It never seems like it’s the right time for them to fall off and actually return to Earth, but with five-straight seasons seeing them in the College Football Playoff, luck is not going to favor them in 2019.

Alabama could very well lose to Texas A&M on the road, LSU at home, at Auburn in the Iron Bowl, or any combination of those next season. Plus, they’ll likely take on a ticked off Georgia Bulldogs team should they make the SEC Championship game once again, and expect Kirby Smart to do everything he can to win that one this time around.

It’s going to be hard for two SEC teams to make the CFP. This will be the year Alabama gets humbled.

2. Justin Herbert Runs Away with the Heisman

Justin Herbert will enter the 2019 season with the nation’s longest active streak of consecutive games played with a TD pass at 28. #GoDucks

Oregon Ducks quarterback Justin Herbert had the chance to enter the NFL Draft and likely be selected in the top-10. Instead, he returned to Eugene for one more season, and he’s going to win the Heisman Trophy because of it.

After breaking his collarbone in 2017, Herbert played all 13 games for head coach Mario Cristobal’s 9-4 team last season. Herbert tossed 29 touchdowns against eight interceptions as a junior in his first full year of college football, and he got better as it went on.

With three four-star wide receivers coming to the Ducks next season, plus both CJ Verdell and Travis Dye returning ? two running backs who combined for 2,141 total yards and 17 touchdowns last year ? Herbert is going to light up the Pac-12, possibly lead Oregon to the College Football Playoff, and then make a trip to New York City for the Heisman Trophy ceremony.

Tom Herman‘s program is poised to roll with the big dogs, and after beating both Oklahoma and Georgia in 2018, the Longhorns will be back on top of college football behind quarterback Sam Ehlinger.

Texas’ three regular season losses came by a combined nine points against Maryland, Oklahoma State and West Virginia — three teams the Longhorns should have beaten. With the fifth-ranked recruiting class coming to Austin in 2019, plus a defense that’s improving faster than most in the Big 12 Conference, the Texas Longhorns will make the College Football Playoff for the first time and advance to the national championship game.

I can’t wait to see what the college football season has in store for the 2019 season. While there’s an incredibly high likelihood that none of these come to fruition at all, I’m standing by them for the long haul and ready to accept all challengers as we await another electric year of college football.