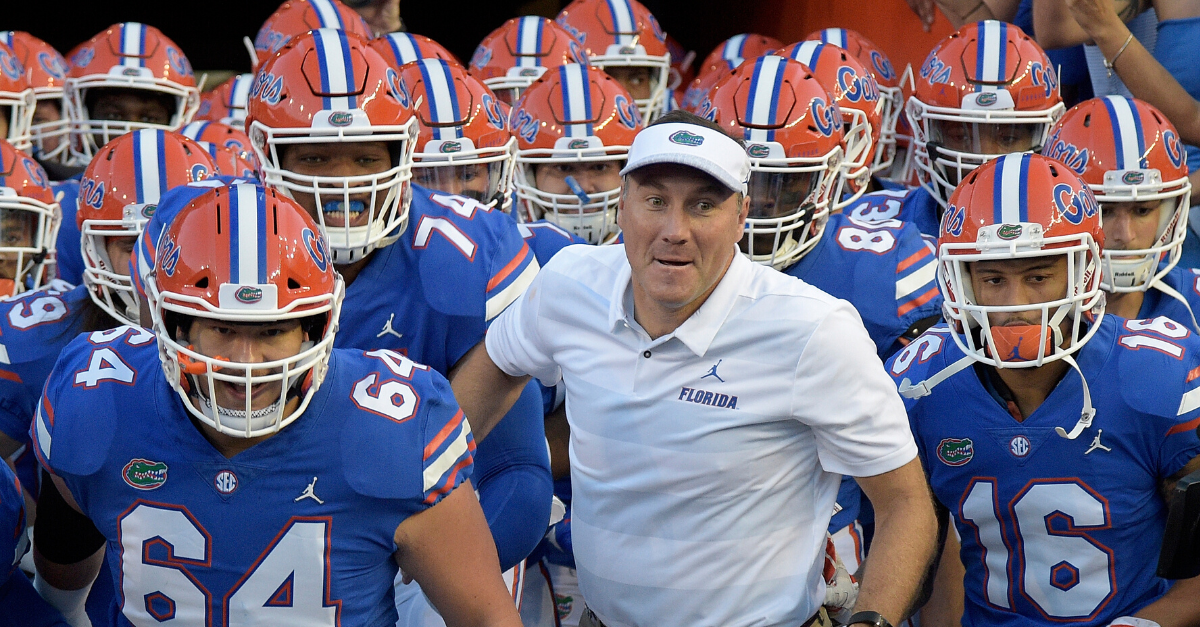 Last year, I thought Oregon’s Justin Herbert would run away with the Heisman Trophy (wrong). Last year, I thought the Nebraska Cornhuskers would win double-digit games (not even close). I did predict the Alabama Crimson Tide would miss the College Football Playoff, and for that, I’ll consider last season a complete and total success.

What better way to follow up a year of bold predictions with another round. And once again, I’m going way out on a limb, giving hope to the hopeless, spicing up the chili, and making some shameless predictions that — if the stars and heavens align — earn bragging rights for life. What follows are 10 bold predictions for the 2020 college football season.

The time has come. Harbaugh’s current contract ends after the 2021 season, and fans in Ann Arbor are growing restless. There aren’t many head coaches better than the khaki-clad leader, but the truth is that the Wolverines are stuck in the mud.

Heading into 2020, Michigan didn’t sign a five-star recruit in its class. Harbaugh’s staff needs to replace starting quarterback Shea Patterson, two-time All-Big Ten linebacker John Uche, and one of UM’s most electric playmakers in Donovan Peoples-Jones. On top of that, three of Michigan’s first five games are on the road against Washington, then tilts with Wisconsin and Penn State.

The pressure is mounting, Ohio State is as dominant as ever, and I don’t think Harbaugh lives to see another season.

A lot of talent returns for the Mountaineers in 2020. More @PFF_College ratings here for an App State squad that has finished as North Carolina's highest-ranked football team each of the last 2 years. #GoApp pic.twitter.com/8xAeJ1OItB

The Appalachian State Mountaineers turn over coaches faster than IHOP pancakes. Scott Satterfield led the program to three 10-win seasons in five years, then was hired at Louisville. Eliah Drinkwitz took them to a 12-1 record last season before jumping ship and heading for the SEC’s Missouri Tigers. But a Boone, North Carolina alum who seems ready to drive this program even further is getting his shot next season.

Shawn Clark signed a five-year contract in December, then led his team to a 31-17 win over UAB in the R+L Carrier Bowl. The Sun Belt Conference champions finished 13-1 and return several key starters in 2020, including quarterback Zac Thomas. They’ll travel to Wake Forest and Wisconsin within the first three weeks of the regular season.

After knocking off both programs, App State will be staring down an undefeated regular season and reach a New Year’s Six bowl game.

The Oklahoma Sooners made the CFP four times in five years, but haven’t won a game. The Texas Longhorns — for all its brand loyalty and history — haven’t had a 12-win season since 2009. Baylor lost Matt Rhule, Kansas State is in transition under Chris Klieman, Oklahoma State and Mike Gundy are all sizzle and no steak, and Matt Campbell doesn’t have the resources to make Iowa State more than a pesky 9-win team.

This conference is a mess, and any team can lose on any given Saturday. I don’t like anyone escaping the regular season unbeaten, and two losses for everyone could very well be the reality. And with the Big 12 failing, that means…

No one has any idea what goes on in the Pac-12 Conference. The Big 12, as previously mentioned, is turning into the Wild West. Clemson is a lock to roll over the ACC, and Ohio State will be powerhouse behind quarterback Justin Fields. All this chaos opens the door for the SEC to get two teams in, and there are several that could fill those spots.

We know Alabama will be hanging around. Georgia might be losing Jake Fromm, but the Dawgs are always dangerous. Defending champion LSU will be in good favor come selection time. The Florida Gators quietly won 11 games last year, and Auburn could always make another push. The conference schedule validates putting two teams in, especially with Tennessee, Kentucky and Texas A&M all finishing with eight wins last season.

The SEC is stronger than ever, which means two programs would easily finish in the top four.

Manny Diaz is close. The Hurricanes aren’t the juggernaut of the early 2000s, but The U is flashing the kind of swagger South Beach demands.

All-American Gregory Rousseau and his 15.5 sacks return to lead a Hurricane defense that ranked 13th in total defense last season. Former Houston quarterback D’Eriq King has transferred in and could explode in this offense, especially with the addition of Rhett Lashlee as offensive coordinator. The schedule is in their favor, and the turnover chain is polished and ready for double-digit wins in 2020.

The Aggies are on the cusp of greatness. Jimbo Fisher is working his magic in College Station and just inked the sixth-ranked recruiting class for 2020. Playing Alabama and LSU every year is preparing the program for big-time games, and they’ll finally get back to the 10-win plateau next season.

Quarterback Kellen Mond is back. Last season’s leading rusher Isaiah Spiller returns. Five-star talent like wide receiver Demond Demas and safety Jaylon Jones are arriving on campus. The Aggies are set up for a massive campaign that could put the program in serious College Football Playoff consideration, too.

The biggest game of the Clemson Tigers’ season will be an early November clash with Brian Kelly’s Fighting Irish. Quarterback Ian Book is returning for his senior season, and Notre Dame is coming off an 11-win season, making that 33 wins in three years. When Clemson and Notre Dame meet, you know ESPN’s College GameDay will be on hand in South Bend.

The last time these two programs met, Clemson embarrassed Notre Dame on a national stage. That 30-3 loss in the 2018 Cotton Bowl semifinal game was an Irish nightmare, and the seniors on this team don’t forget it. Clemson is great, but so is Notre Dame. The Irish need to replace a lot of talent and could be underperforming at this point, which sets Clemson and Trevor Lawrence up for a trap game as they look towards December.

Top Notch.#PennState is one of four teams to finish in the CFP Top 12 each of the last 4 seasons. 👀#WeAre pic.twitter.com/h1yk4cte3p

The time is now for James Franklin’s program to turn the corner.

The Nittany Lions return a fantastic cast, led by All-American linebacker Micah Parsons, who should be a top-10 pick in the 2021 NFL Draft. A stable of blue-chip running backs and quarterback Sean Clifford coming off a solid first season as the starter gives the offense even more juice. Penn State faces obstacles in the conference, but one look at their schedule, and you see a huge opening for them.

Virginia Tech and Michigan are their notable road matchups, while Indiana, Nebraska and Rutgers are the others. They get Iowa, Michigan State and Ohio State at home inside Beaver Stadium, and the rest of their schedule are home tilts as well.

They rattle the Buckeyes, and the door is open. Happy Valley reclaims the Big Ten title.

Congratulations to @KedonSlovis on being named a Freshman All-American by @TheFWAA!

Bovada gave USC’s sophomore quarterback the seventh-best odds to win the 2020 Heisman Trophy, which sounds great considering the last two winners — Oklahoma’s Kyler Murray and LSU’s Joe Burrow — weren’t even top-10 during the preseason. Slovis, however, came out firing as a true freshman.

Slovis was coached by NFL Hall of Famer Kurt Warner in high school, so I’m banking on that tutelage to pay off in 2020.

Dan Mullen and his visor will hoist the CFP national title trophy inside Hard Rock Stadium in South Florida next season.

The pieces are in place. Coming off back-to-back seasons with top-10 finishes, two New Year’s Six bowl game wins, and a combined record of 21-5, the Gators are legit. The return of quarterback Kyle Trask, offensive weapons like tight end Kyle Pitts and newly-acquired wideout Justin Shorter, possibly the strongest defensive back-end in the country led by Marco Wilson and Kaiir Elam, and incoming studs like five-star defensive lineman Gervon Dexter make the Gators a well-rounded team looking to make noise.

Georgia enters a new era without Jake Fromm, and Tennessee’s strong finish doesn’t prove the Vols are back. An SEC Championship Game berth is Florida’s for the taking. The Gators’ biggest game is an October tilt with LSU, which will be at home in Gainesville. Florida will be rolling near the end of the season, head to Atlanta with a CFP berth within their grasp, and return to the mountaintop.

Florida holds the sixth-best odds to win the CFP title game next season, and for me, I’m hammering those odds early and often.