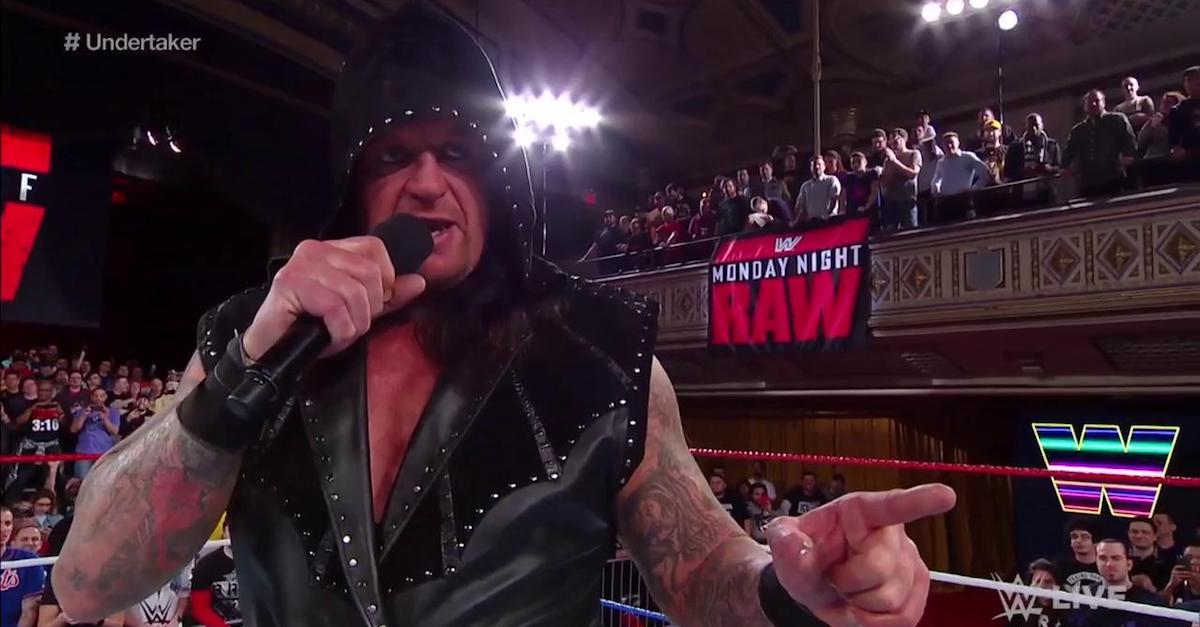 Raw opened with Jim Ross and Jerry “The King” Lawler in the Manhattan Center. It then shifted over to Shane and Stephanie McMahon in the Barclays Center.

Kurt Angle brought out the entire locker room, including the locker room for Brock Lesnar’s showdown with Braun Strowman, Kane

Strowman and Kane hit the ring, and Paul Heyman said his client, Brock Lesnar, is ready for a fight. Strowman took Kane’s head off with a clothesline, then ran outside and ate a clothesline from Lesnar. Lesnar F-5’d Kane and showed off before Strowman attacked Lesnar and took the top off the announce table. He picked up Lesnar and hit a running powerslam through the table. Strowman’s music hit as Lesnar held his ribs and the title contender celebrated in the ring as Raw went off the air.

The Revival worked over Anderson for a bit before he got the hot tag to Gallows and they connected on the Shatter Machine for the win.

After the match, Dawson turned around Scott Hall before each member of DX took turns taking him out.  HBK and Triple H connected on the Sweet Chin Music, pedigree onto Dash Wilder before they called Finn Balor to hit the Coup De Grace.

Degeneration-X returned to the Manhattan Center

Shawn Michaels started to tell old stories, and Triple H said he couldn’t anymore. Triple H then thanked the crowd for helping propel WWE Raw to what it is. He gave shouts to Rick Rude and Chyna before talking about driving the tank to WCW and being in the Manhattan Center every week. Triple H said he didn’t come alone, and Road Dogg and Bad Ass Billy Gunn hit the ring. They called out X-Pac, who then called out Razor Ramon before the final commercial break.

Back from the break, Ramon said Raw 25 was just too sweet before he was interrupted by the Balor Club (Finn Balor, Karl Anderson and Luke Gallows) to too sweet DX. The Revival interrupted the moment to start their main event match with Balor Club.

Hardy reversed the Sister Abigail seconds into their matchup and had the crowd going with “Delete” chants. Wyatt landed a nasty collision, then hit Sister Abigail for the pinfall.

Thanks to some help from the Miztourage (Bo Dallas & Curtis Axel), The Miz won the Intercontinental championship for the eighth time by defeating Roman Reigns at Raw 25.

Undertaker returned to the Manhattan Center

Undertaker cut a promo on burying his opponents for the last 25 years. He called out Stone Cold, Mick Foley and Kane, who “answered to the reaper.” Undertaker said after 25 years, they all rest in peace. Very odd end to his short promo. There’s got to be more later in the evening.

Stone Cold back to stun the boss

Stephanie and Shane awarded Vince with a plaque commemorating 25 years of Monday Night Raw. Vince trashed the crowd and said he only had one person to thank — himself. That’s when Stone Cold’s music hit and Austin took to the ring to a HUGE pop. Vince said he’s a senior citizen and Shane is in his prime. Austin shook Shane’s hand, raised his arm and hit a stunner. Vince got a couple of beers and handed one to Stone Cold, saying Shane had it coming. Vince drank from the beer, hugged Austin, then took a stunner for old time’s sake.

It wouldn’t be #Raw25 without Austin stunning McMahon pic.twitter.com/w7p7NYDGnx

Shane got up again, drank some beer with Austin and took another stunner.

The moniker is the same, @IAmEliasWWE. You WANT some; COME GET SOME!!! #RAW25 @JohnCena pic.twitter.com/bcIcttPvgV

"WELL, LET ME TELL YA SOMETHIN', MEAN GENE!"@WWE Hall of Famer @TheGeneOkerlund is getting the #RoyalRumble report from the @WWE Champion himself, @AJStylesOrg! #RAW25 pic.twitter.com/KeUzafREUy