The Alabama Crimson Tide have been rolling in recent years under Nick Saban. Since Saban took over as head coach, the Tide have won six titles and had three Heisman Trophy winners. However, none of those Heisman winners were quarterbacks.

That may be surprising, but it doesn't mean that Alabama football hasn't boasted good starting quarterbacks. Sure, Saban's signal callers used to have reputations as "game managers," but some really talented guys have come through Tuscaloosa and wound up in the NFL.

The 10 best quarterbacks in 'Bama history wasn't easy to compile. With how Saban recruits, it's likely this list could shift someday. Bryce Young could be cracking the top 10 sooner than later after becoming the first Heisman-winning quarterback under the legendary college football coach. It's difficult to leave John Parker Wilson, Saban's first QB at Alabama, and Blake Sims, who went from a running back to a starting quarterback, off the best Alabama QB list, too.

Another notable starting QB who didn't make this list? Bart Starr, the NFL legend. Starr's college football career was actually marred by a back injury caused by a hazing accident. He had a better NFL career than most Alabama quarterbacks, but this is a college list. Which of these picks will leave Alabama fans yelling "Roll Tide!" and which will leave them madder than Saban anytime he ever looked at Lane Kiffin or lost to LSU? 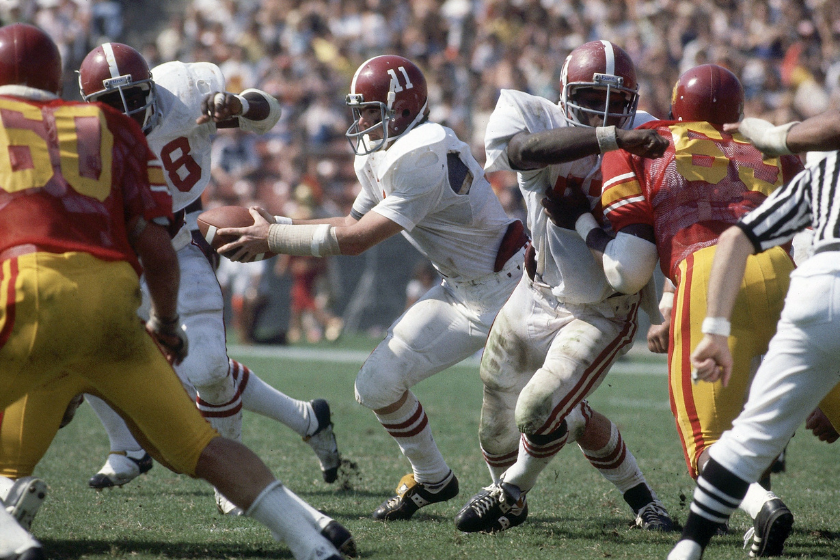 Jeff Rutledge followed in his brother Gary in terms of being a starter for the University of Alabama. He also followed in Gary's footsteps by leading Alabama to a national title in 1978. On top of that, he won three SEC championships as well. Oh, and he won two high school titles out of Birmingham, Alabama, too. 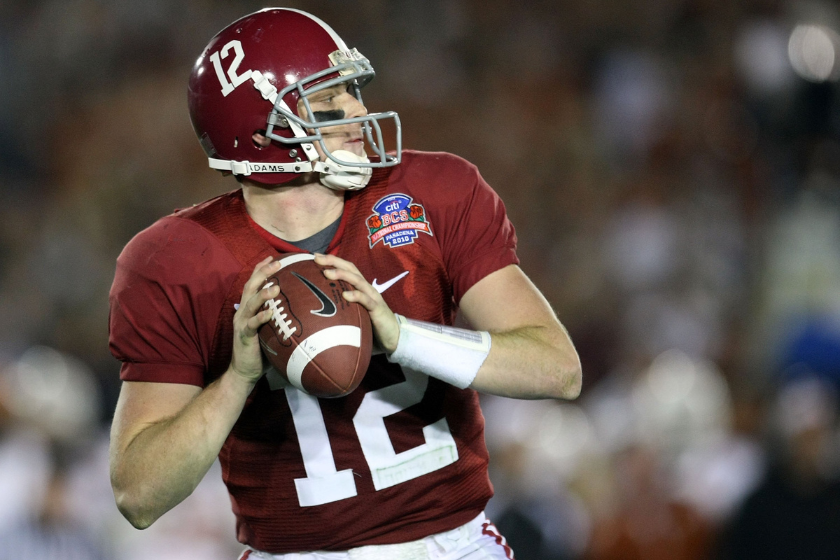 When you think of a game-managing passer, McElroy is probably a quintessential example of that. He had a reputation for being smart--he graduated with an MBA--and for avoiding mistakes.

In two years as a starter, he threw for 37 touchdowns and all of nine interceptions, staying out of the way for a team that won the national championship in 2009. That would be Saban's first title with the Crimson Tide, but not his last.

Now, this was 1961-style NCAA football, mind you. In his senior season, Trammell threw for 1,035 passing yards and eight touchdowns while also rushing for nine more scores. The Tide ended the year undefeated and won their first title in 20 years. Instead of going to the NFL, Trammell got a medical degree. Sadly, he died of cancer at the age of 28. 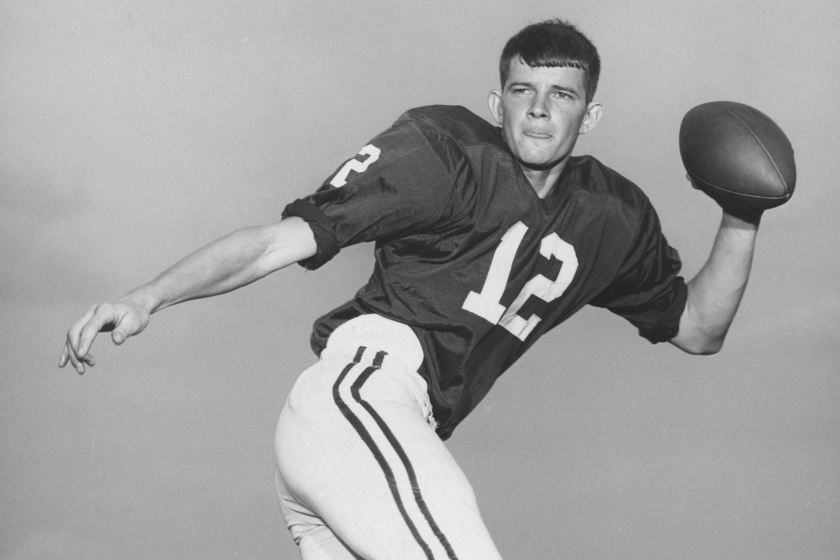 ?Before winning an NFL MVP and being enshrined into the Pro Football Hall of Fame, "The Snake" did his thing down in Tuscaloosa.

As a backup, he was part of a title-winning team in 1965, but his own personal success came primarily in 1967. That year he was named the SEC Player of the Year and was a first-team All-American. His 45-yard touchdown run "in the mud" gave Alabama a 7-3 win over Auburn in the Iron Bowl. 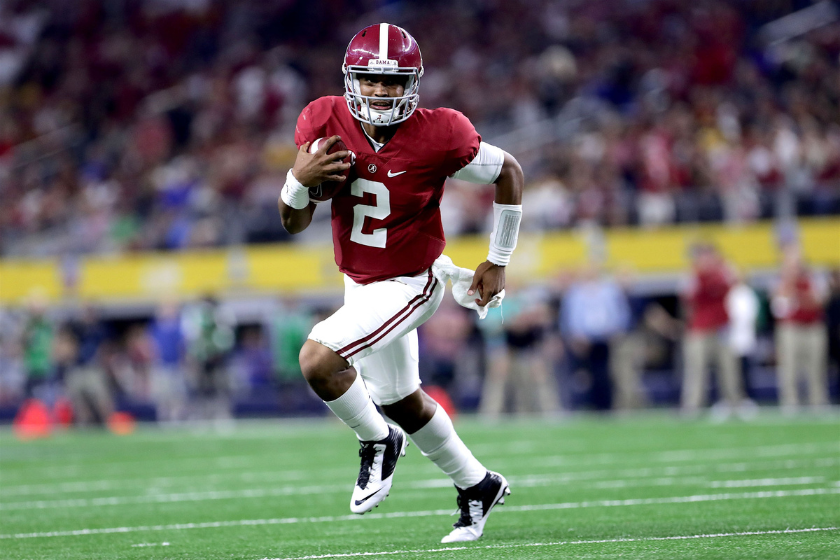 Hurts took his play to a new level once he moved on to the Oklahoma Sooners, but Hurts saw a ton of success before transferring. He was the first freshman to start for Saban, and he rewarded that decision by being named the SEC Offensive Player of the Year and leading the Tide to the championship game.

Alabama lost to Clemson, but he would get revenge the next season in the College Football Playoff when he was named the Sugar Bowl MVP in a win over the Tigers. In the title game against the Georgia Bulldogs, he was pulled for another quarterback higher on this list. Losing the starting job led to his transferring to Oklahoma, which resulted in a second-place Heisman finish. It worked out for everybody involved. 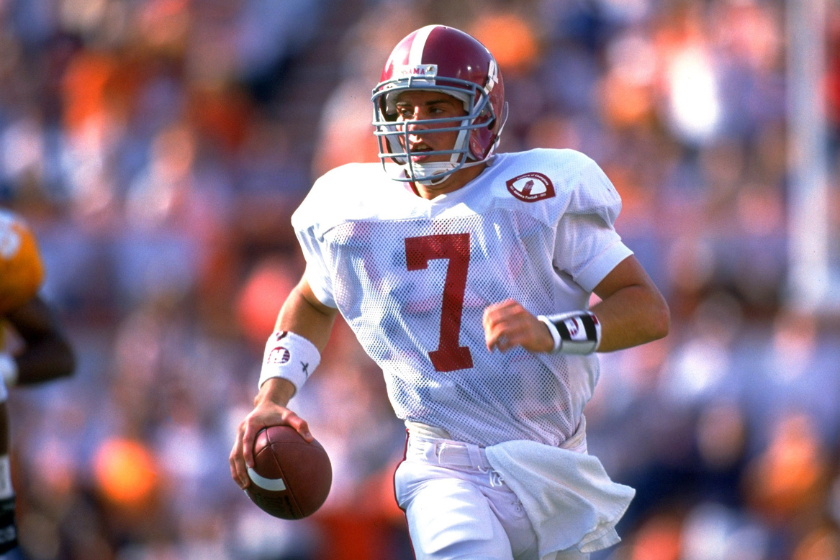 This list, like Alabama history, is dominated by Bryant and Saban. Between those two eras were some dark times, save for the 1992 season when they went undefeated and won a national championship under Gene Stallings. Barker was the starting quarterback for that team. In his last year at the school he won both SEC Player of the Year and the Johnny Unitas Golden Arm Award. He left college with a 35-2-1 record. 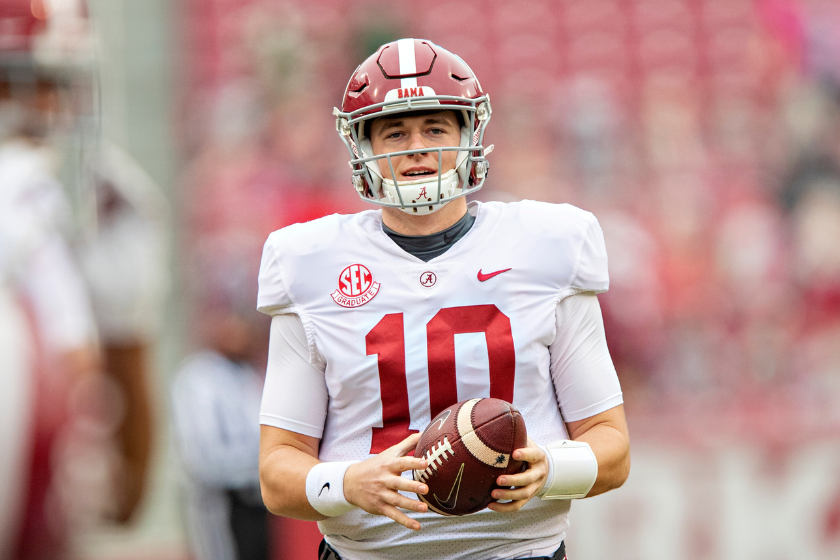 After taking over due to an injury in 2019, Jones threw for 14 touchdowns against three interceptions. This earned him the starting job in 2020. Any skepticism was quickly tossed aside as he put up gaudy numbers with Steve Sarkisian as his offensive coordinator.

Sure, he was throwing passes to Jaylen Waddle (before he got hurt) and Heisman winner Devonta Smith, but you can't argue with his numbers. Jones threw 41 touchdowns against four picks and led the nation with 4,500 passing yards. He also set a single-season record with a 77.4 completion percentage. Jones threw nine total TDs against Notre Dame and Ohio State in the playoffs to lead Alabama to another title.

Jones went pro after his gaudy 2020 numbers and was the New England Patriots' first-round pick in the 2021 NFL Draft in hopes he can be the replacement for Tom Brady. No pressure.

Well, Bryant called Namath the greatest athlete he ever coached, so there's that. "Broadway Joe" was a legendary NFL quarterback for his swagger and personality and also for his play, of course. Namath totaled 24 touchdowns in the air and 15 on the ground in his three seasons playing for Alabama. His last season in 1964 ended with a national championship before going on to become the New York Jets legend we all know today. Perhaps it was at Alabama where the Super Bowl III signal-caller learned how to win championships. 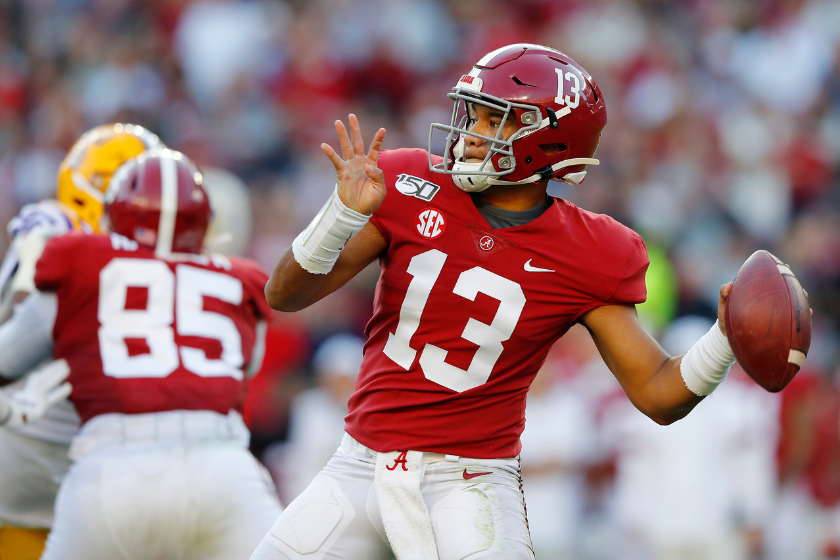 Tagovailoa is the quarterback who pushed Hurts, a future Heisman candidate, to the bench. He was as a true freshman who had never made a start when he stepped onto that field in Atlanta to beat the Georgia Bulldogs.

The next year, he threw for 43 touchdowns and six interceptions in a season that ended with a loss in the title game. Things were going great in the 2019 season, as Tua had 33 touchdowns and only three interceptions through nine games. Then, Tua suffered a hip injury that left him sidelined for the reason of the season. Tua's 87 career touchdown passes and 7,442 passing yards rank first and third in program history, respectively.

The former Alabama quarterback entered the NFL Draft in spite of the injury and was the fifth-overall pick by the Miami Dolphins. He became the first left-handed starting quarterback in the NFL since Florida Gators legend Tim Tebow. Hopefully, he has a better NFL career if only to avoid becoming a gimmick for a baseball team. 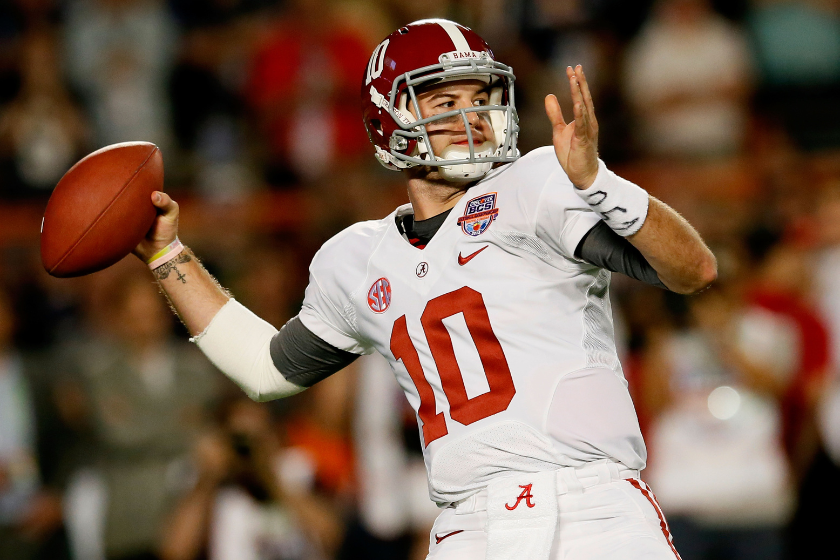 Are there more talented quarterbacks on this list? Sure, but McCarron got a chance to start three full seasons. He was a member of three title-winning teams and is the only Alabama quarterback to lead the Crimson Tide to two championship teams.

It wasn't just the talent around him, though. McCarron finished his college career with over 9,000 passing yards (most in Alabama history), 77 touchdowns and only 15 interceptions. He wasn't a first-round pick like Tua or Jones, and he's had the NFL career of a journeyman. It doesn't matter. McCarron is the best quarterback in Alabama history.

This article was originally published on December 7, 2021, and has been updated since.