A surprising number of athletes try to make the transition from pro sports to movies or TV shows, and a lot of them fail because they just don't have the charisma or talent to make it work. Wilt Chamberlain was legendarily bad in "Conan the Destroyer", Brett Favre was a grinning, plastic-smiled mannequin in "There's Something About Mary", Chris Bosh's spot on "Entourage" was so bad it spawned a legion of memes, and the less said about Rick Fox's career, the better. Then you have Shaquille O'Neal's legendary acting career, which was mostly disastrous (and the only reason it's only "mostly" is because he was surprisingly good in "Blue Chips"), but in the most entertaining way possible.

But some athletes take to acting and have as much success onscreen (or more) as they ever had on the field. No athlete-turned-actor has ever won an Oscar for their performance, although funnily enough, several NBA players have won Academy Awards as producers, including Kobe Bryant, Kevin Durant, Steph Curry and -- incredibly -- Shaq. But numerous athletes have proven themselves to be capable thespians, particularly when it comes to comedy; a lot of stars are shockingly funny on camera (especially, it turns out, pro wrestlers).

A special disclaimer: we're not counting bodybuilders here, which is why neither Arnold Schwarzenegger or Lou Ferrigno is making an appearance. I don't care how many Mr. Olympias someone has; at least pro wrestling requires actual athletic skill. "The Terminator" is going to have to sit this one out. 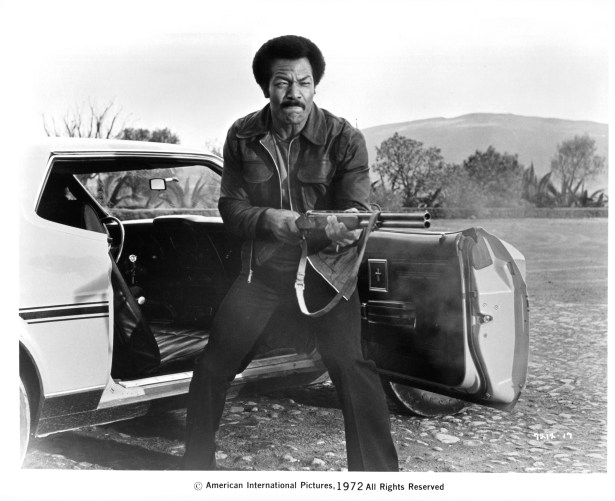 Remember when Michael Jordan, with no worlds left to conquer, walked away from basketball at the peak of his powers to go play baseball? That's pretty much what Jim Brown did -- only he did it to pursue acting. Brown was comically dominant as a running back in the 1950s and 60s, then walked away at age 30, one year after winning his third MVP, in order to star in "The Dirty Dozen". It worked out for him: after the movie's massive success, Brown went on to star in numerous hit movies through the '70s, many of them in the blaxploitation genre (at least one alongside fellow former NFL player Fred Williamson). 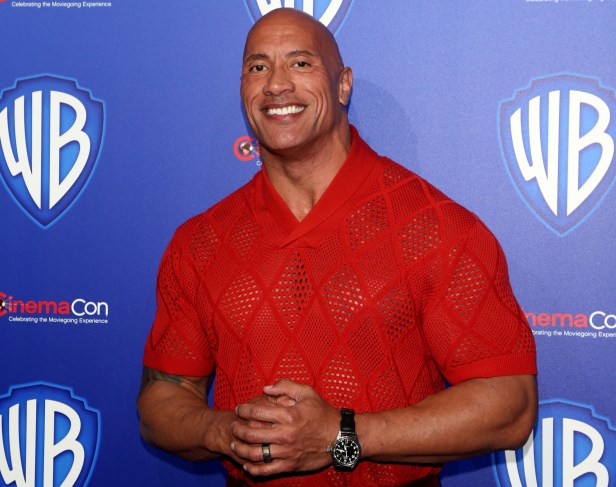 We couldn't have this list without The Rock. Though he never had an NFL career, Johnson was a productive player at a premier college football program, the University of Miami Hurricanes (he actually won a national championship with them in 1991) -- but that's not where he rose to prominence. No, that would be the WWE, where he was the organization's headliner before using his trademark blend of remarkable charisma and an indefatigable work ethic to become one of the biggest movie stars in the world. Maybe he didn't make it in professional football, but his career seems to have worked out in the end. 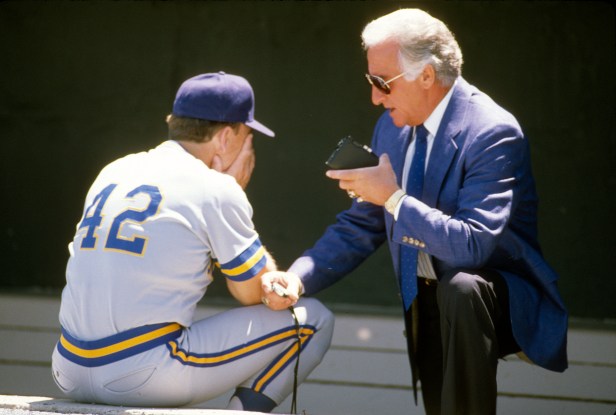 This is kind of cheating, but Bob Uecker did play in the majors -- to the tune of six seasons as a catcher with a career batting average of .200. Uecker's real success, of course, came as the longtime voice of the Milwaukee Brewers -- a role he still holds today. He has also had a remarkably hilarious career as an actor, though, both as a cast member on "Mr. Belvedere" and as announcer Harry Doyle in the "Major League" movies. Any sports movie fan can remember the exact intonation of his deadpan "Just a bit outside." 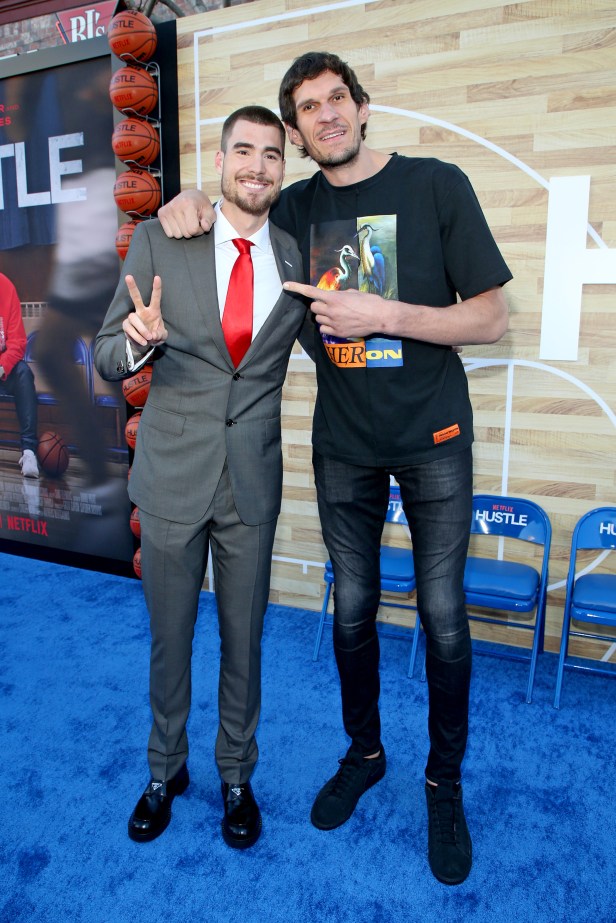 Boban has really only had two significant film roles so far, but both were memorable: one in a visceral library fight scene with the title character in 2019's "John Wick: Chapter 3 - Parabellum", and more recently in a cameo as a basketball player deadpan pretending to be younger than he is for a scout in 2022's "Hustle". If I were a betting man, I would put money down on Boban to get a lot more acting roles given his versatility (a 7-foot-4 guy with a stony-yet-expressive face and remarkable comedic timing) and unorthodox charm. 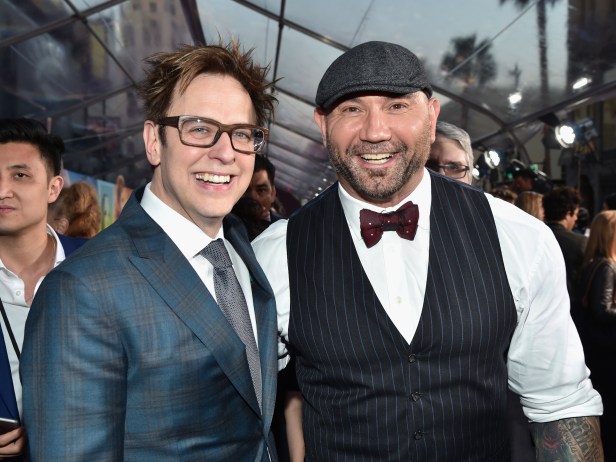 Dave Bautista's success shouldn't have been a surprise after The Rock and John Cena both showcased their comedic and action skills on the silver screen, but I don't think anyone was quite expecting Bautista to be funnier than either of them. Somehow Bautista was the funniest thing on screen in 2014's "Guardians of the Galaxy", a movie that featured Chris Pratt, Zoe Saldana, Karen Gillan, Lee Pace, John C. Reilly, Peter Serafinowicz and Bradley Cooper -- all of whom are actors with significant comedic experience. 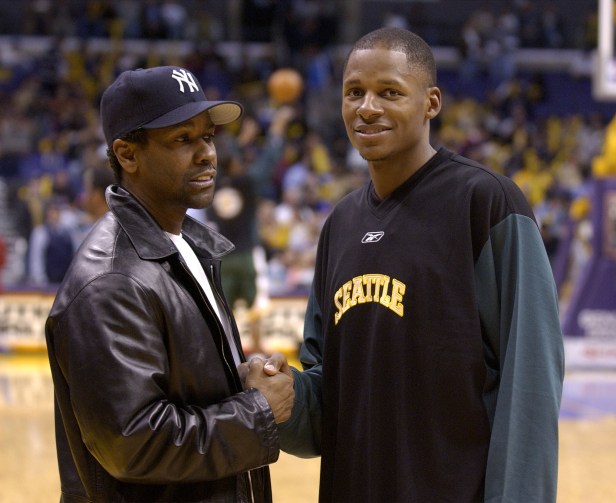 Hall of Fame NBA star Ray Allen only has one major acting credit to his name, but considering it was a starring role in a major film opposite one of the greatest actors in film history, it would be a crime to leave him off this list. Ray-Ray's role as Jesus Shuttlesworth in Spike Lee's "He Got Game" opposite Denzel Washington is one of the more remarkable film roles by a currently-active star player -- Allen was only 23 when the movie was shot, and just two years out from the first of his 10 All-Star appearances. The ultimate "He Got Game" story: an improvised one-on-one session between Allen and Washington where Denzel scored six straight points on Allen, causing a visibly pissed-off Ray to suddenly start torching the older actor. 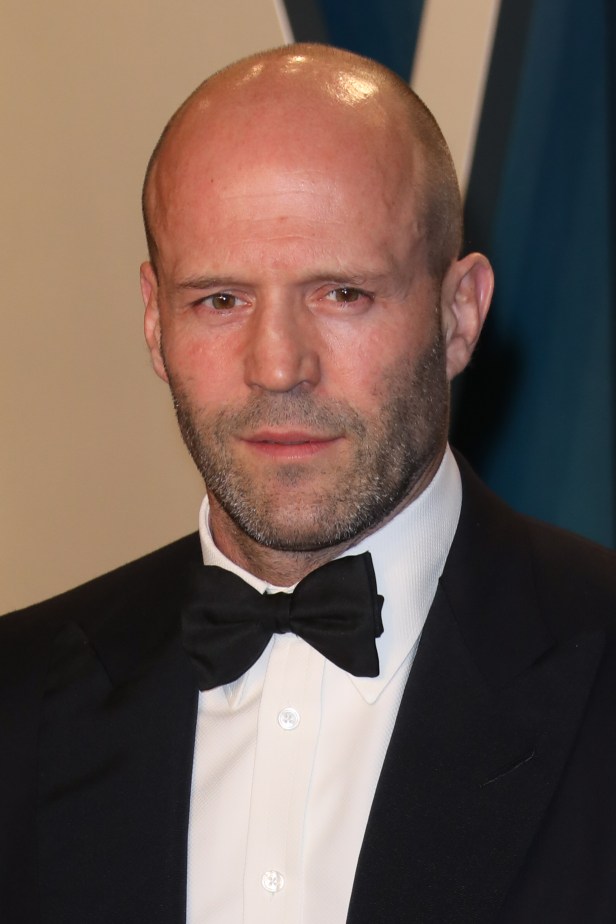 Jason Statham has had one of the stranger lives of any actor -- as far as I can tell, he's the only former professional diver (he never made the Olympics, but he was on Britain's 1990 Commonwealth Games team) to ever become a movie star. And a star he is: Statham has proven himself extremely adept as an action star ("The Italian Job", "Lock Stock" and "Two Smoking Barrels", "Snatch", "The Expendables", the "Fast & Furious" movies, "The Transporter"), and more recently even as a comedic one: he's legitimately the funniest thing in 2015's "Spy" playing a caricature of himself, a role he's set to reprise in the sequel. 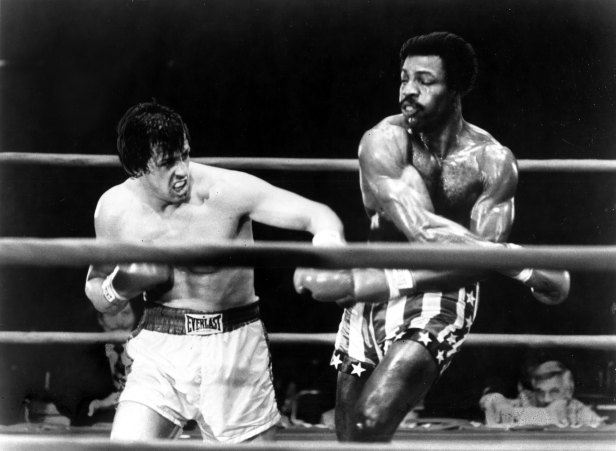 It's a testament to his acting success that I didn't even realize Carl Weathers had been a pro football player for the Oakland Raiders (and the B.C. Lions of the Canadian Football League, but really, who cares about that?). Weathers is now solely known as an actor with remarkable versatility: as charismatic star boxer Apollo Creed in the "Rocky" movies, in 1987's action-horror movie "Predator", in 1996's comedy "Happy Gilmore" and more recently in sci-fi series "The Mandalorian". 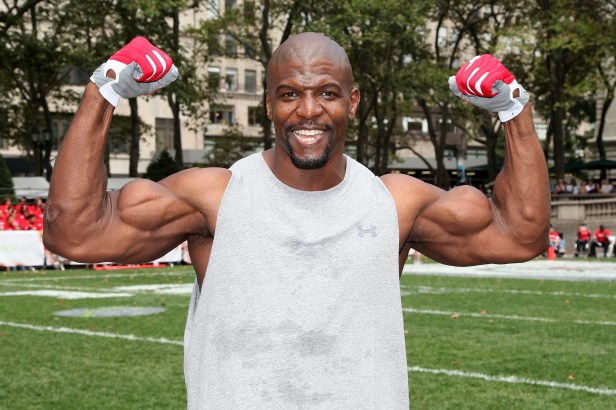 Terry Crews might be the most famous former football player-turned-actor, and for good reason: his comedic timing and gregarious personality means he'll be getting steady work for the rest of his life. After a brief and unremarkable pro football career as a linebacker, Crews has had a huge number of comedic roles (including in "The Expendables" movies alongside several other members of this list), committing to every one of them as hard as any actor in the business. He is probably best-known for his role as Sgt. Terry Jeffords on "Brooklyn Nine-Nine". 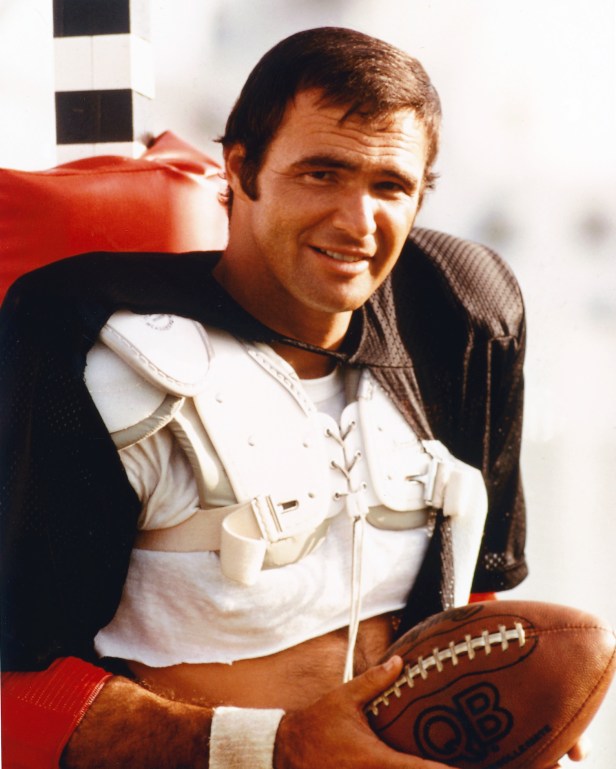 RELATED: Burt Reynolds Did More Than Play for FSU. He Changed the Uniforms.

Did you know that before he was the star of 1974's football film "The Longest Yard" (the movie that reinvented the sports movie genre), Burt Reynolds was himself a college football star? Though he's now far better known for being an Emmy winner and Academy Award nominee, Reynolds went to Florida State as a running back on a football team scholarship before blowing out his knee in the first game of his sophomore season. Ultimately he pursued an acting career as a result -- basically meaning he's the real-life version of Justin Hartley's character on "This Is Us". 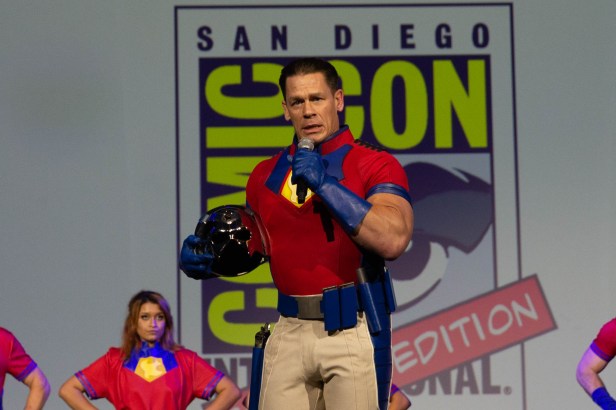 We knew college football player and wrestler John Cena was funny before James Gunn's "Peacemaker" series; he was legitimately hilarious in "Blockers", "The Suicide Squad", and "Trainwreck". What we didn't know is he's legitimately a good dramatic actor, bringing genuine pathos and depth to a character who we'd only ever previously seen as an egotistical douchebag. "Peacemaker" is surprising because it's an exploration of how one's horrible upbringing -- in this case, having a literal KKK member for a dad -- can turn someone who should be a good person into something much more flawed. John Cena is really, really good, and if a former athlete is ever going to win a major competitive acting award, the smart money is on him. 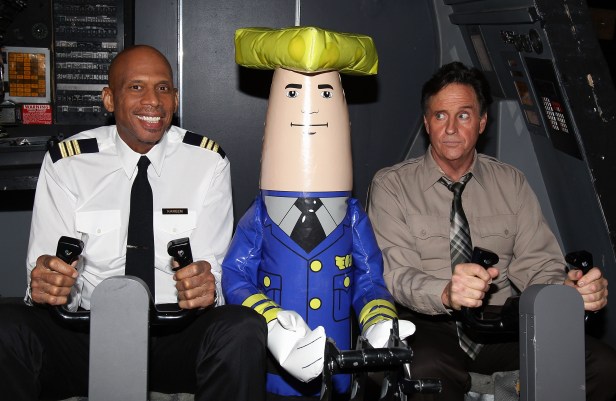 Kareem has a limited filmography, but he might have the best comedic movie turn of any basketball player ever: playing himself under the alias "Roger Murtaugh", in 1980's "Airplane!" in a role that culminates in him being carried out of the plane in his Lakers uniform. It's a shockingly funny turn made all the better by the fact that until this movie came out, nobody actually realized Kareem had a sense of humor, let alone perfect comedic timing. He gets bonus points for his appearance in Bruce Lee's 1978 movie "Game of Death", where Kareem faced off with Lee, his real life martial arts sensei, in an extremely memorable fight sequence. Kareem may have been born in New York, but he really did make his mark in Hollywood (albeit mostly still on the basketball court). 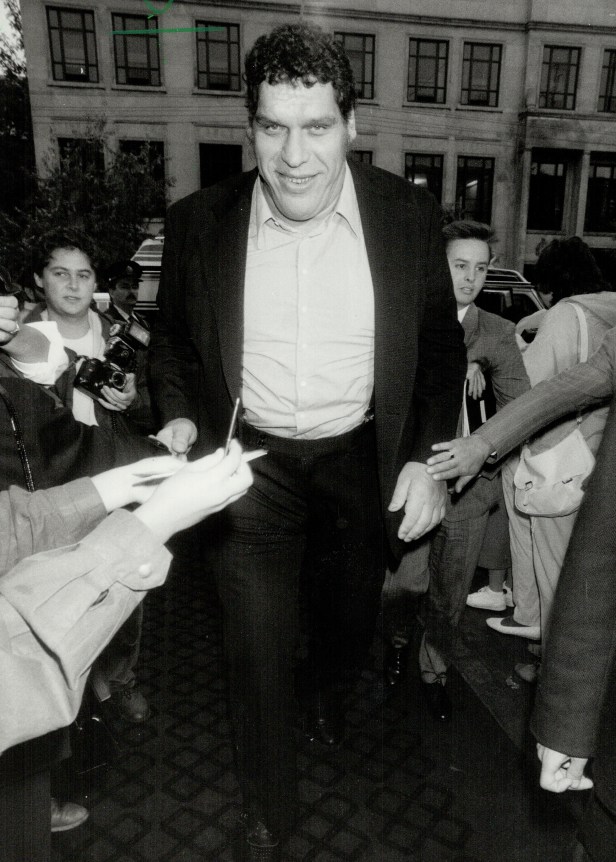 Wrestler Andre the Giant only really had one significant film role -- but since it's impossible to imagine anyone else playing one of the signature roles in one of the best movies of all time, it's equally impossible to leave him off here. Andre might be the funniest thing in "The Princess Bride", a movie absolutely loaded with great actors like Cary Elwes, Mandy Patinkin, Christopher Guest, Wallace Shawn, Peter Falk, Billy Crystal and Robin Wright. I still laugh every time I think about "Anybody wanna peanut?" 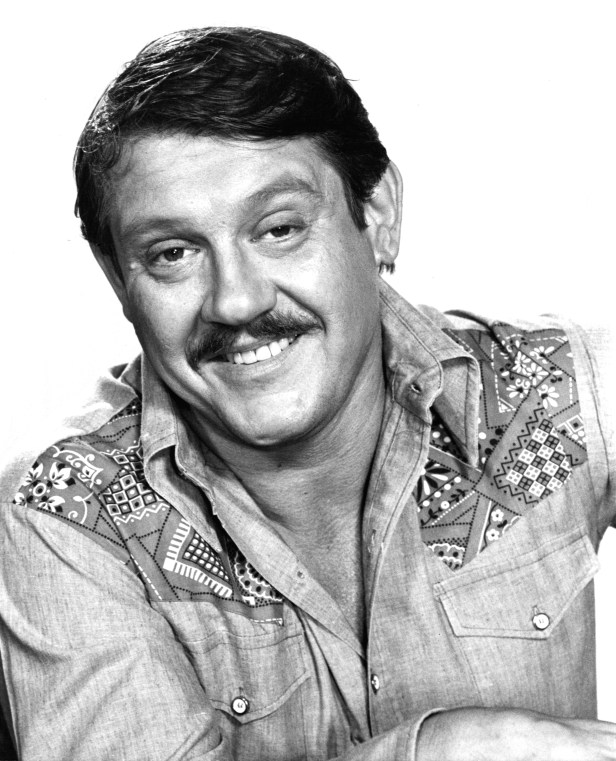 Alex Karras is one of the best defensive tackles of all time, one of the very few interior linemen with at least 100 sacks (he had exactly 100) in a Hall of Fame career. But he might've had a better career as an actor, with a starring role on "Webster" and a supporting one in "Victor/Victoria"...not to mention playing Mongo in 1974's "Blazing Saddles", only one of the funniest film roles of all time. If you don't laugh at his delivery of "Mongo only pawn...in game of life," I don't even know how to relate to you as a human being. 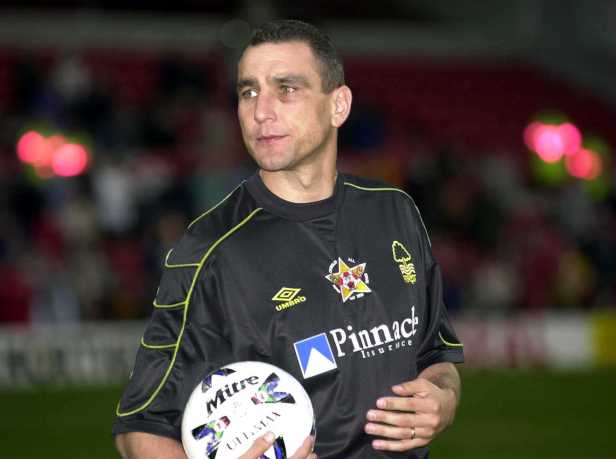 OK, if you didn't already know about it, "Vinnie Jones was a hard-nosed Premier League player" probably seems like the most obvious movie factoid in existence. The man screams "footballer -- so much so that he actually did play the leader of a group of soccer hooligans in "Eurotrip". Nobody would ever consider Vinnie Jones an electrifying onscreen talent, but he's been a surprisingly entertaining character actor for over 20 years now. 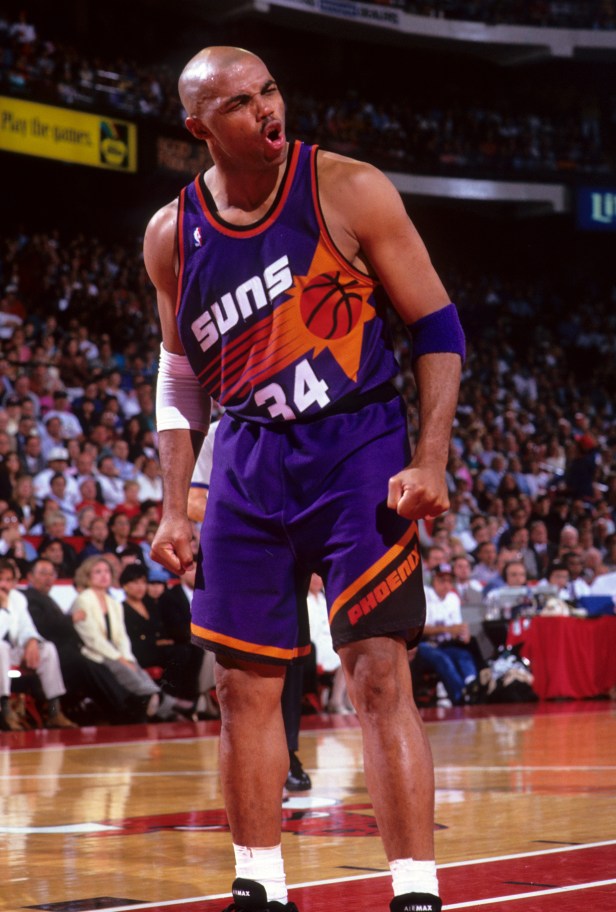 It's honestly surprising Charles Barkley hasn't had more of a chance at acting roles considering how funny and charismatic he is every night on TNT. Barkley was probably the funniest (and most believable) basketball star playing himself in "Space Jam", and he was unusually funny for an athlete hosting "Saturday Night Live". Still, maybe he doesn't want to do much acting since he clearly has so much fun making fun of Kenny Smith at halftime every night. 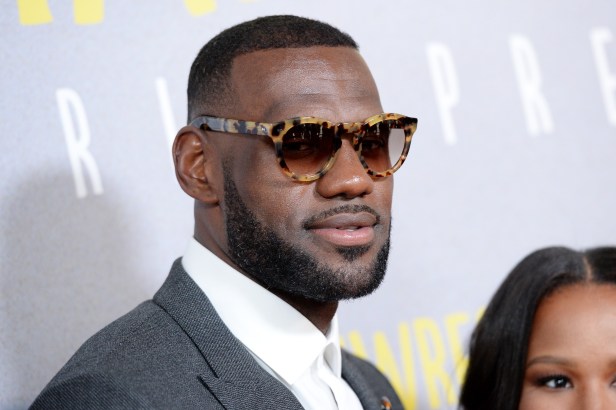 LeBron has always been a remarkably charismatic figure with a ton of media practice (he's been the most famous basketball player in the world since he was in high school), but so was Michael Jordan, and he didn't turn out to be a good actor considering he's infinitely more artificial-seeming than the cartoon characters in 1996's "Space Jam". But then LeBron had a large supporting role as himself in 2015's "Trainwreck", and we realized, oh crap, LeBron is this generation's version of Kareem. His talent was all the more obvious considering the other basketball player with a major role in that movie, Amar'e Stoudemire, was...not as good.

MORE: The 'Remember The Titans' Cast Went on to Have Incredible Careers