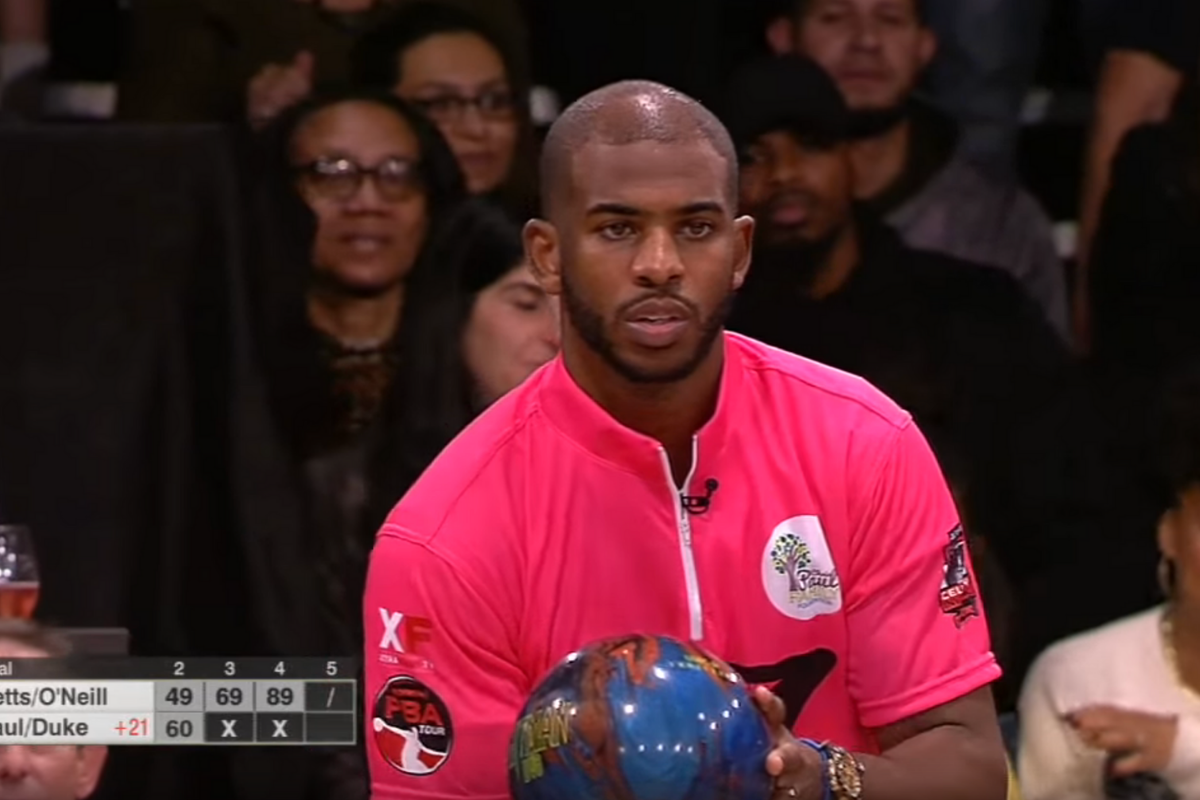 This kind of banter is what makes bowling so thrilling. It’s more than just the game, it’s the atmosphere surrounding the game.

The scent of stale smoke in the air, the greasiest fries known to man, and the $5 pitchers of beer is the holy trinity of a bowling alley. Send a pitcher over to the crew of guys wearing wrist braces and you just earned yourself a friendly salute and a weekly lane, my friend.

All of this screams NBA star Chris Paul. Paul is one of the greatest point guards in the history of basketball. He’s traveled from the New Orleans Hornets to the Los Angeles Clippers, Houston Rockets, Oklahoma City Thunder, and Phoenix Suns and made them all better. His competitive drive pushes his teammates to be their best.

That competitive drive carries over to bowling.

RELATED: Pete Weber?s ?Who Do You Think You Are?? Clip Remains Undefeated

CP3 has been bowling for as long as he’s been hooping. The passion stems from watching his father’s bowling league and getting out on the lanes with his family in his hometown of Winston-Salem, North Carolina. He even received a red, white, and blue bowling ball as a Christmas gift from his parents in high school.

The 11-time NBA All-Star partners with the Professional Bowlers Association (PBA) to host his own bowling tournament for the his charity, the Chris Paul Family Foundation.

Betts ? a two-time World Series champ with the Boston Red Sox and Los Angeles Dodgers ? is an avid bowler himself. The 2018 American League MVP bowled a perfect 300 at the 2017 World Series of Bowling in Reno, Nevada.

Each celebrity is paired with a PBA player. Legends such as the Hall of Fame inductees Weber, Norm Duke, Chris Barnes and Tommy Jones have played in the event along with Jason Belmonte, EJ Tackett, and Sean Rash.

The bowling event was formerly televised on ESPN and has since moved to FOX. It attracts a strong audience, particularly in the younger demographic. PBA CEO Tom Clark loves the event for exposing the sport to a youthful crowd.

?The Chris Paul show always delivers the best younger demographics for us of any show we do,? said Clark, who has been the PBA?s chief executive and commissioner since 2013. ?You end up with a lot of people watching that normally would not watch bowling.?

Naturally, the NBA star and future Hall of Famer ends up winning most of his tournaments with the finesse we see so often on the court. The coveted perfect 300 is still on the to-do list. His career-high is 256.

Paul’s love for the game extends to ownership. The Suns guard owns the L.A.X. PBA franchise. The team has finished as league runner-up three times since Paul purchased the squad in 2012. Other celebrity bowling owners in the league include former Pittsburgh Steelers running back Jerome Bettis, Owens, and Hart.

Paul loves watching bowling on TV and hits the lanes whenever he can.

If Paul’s bowling game is even half as good as his hoop skills, he’ll be throwing strikes for a long, long time.