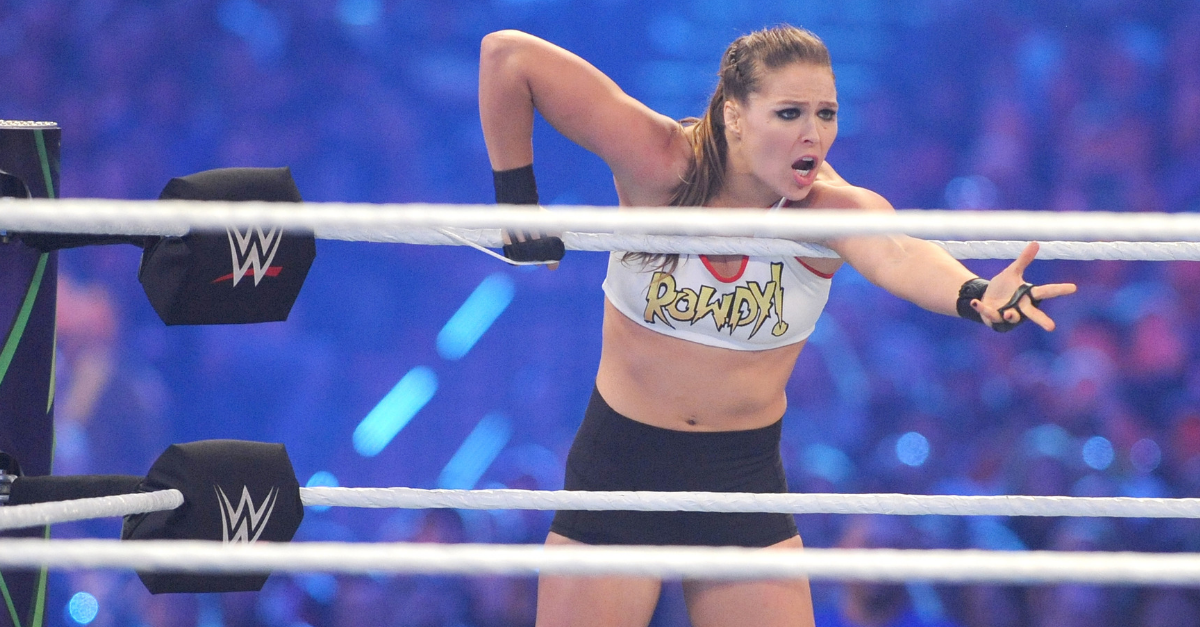 Since her surprise appearance to accompany The Rock in a segment opposing The Authority ? Triple H and Stephanie McMahon ? at WrestleMania 31, former UFC Women’s Bantamweight Champion Ronda Rousey was one of the biggest interests of WWE. Three years after this moment, Rousey made his WWE debut, and became a trailblazer in the women’s division becoming the main event of WrestleMania 35.

While Rousey only competed in the WWE for a year, and is now taking an indefinite leave to start a family with her husband Travis Browne, Rousey made a significant impact during her time as an in-ring competitor.

At the conclusion of the Women’s Royal Rumble, Asuka celebrated her victory as she won a title opportunity at WrestleMania. During this celebration, Rousey’s music hit, and the fans were surprised at her appearance. Asuka, along with Raw Women’s Champion Alexa Bliss and SmackDown Women’s Champion Charlotte Flair, were also surprised, at Rousey stared all of them down and pointed to the WrestleMania sign.

At WrestleMania 34, fans were pleasantly surprised at Rousey’s showing, especially with it being her first-ever match. Rousey was highly competitive, even standing toe-to-toe with Triple H. In the end, Rousey was able to force Stephanie to tap out, gaining the victory for her team.

Just two months after her in-ring debut, Rousey competed against Nia Jax, who challenged her, for the Raw Women’s Championship at WWE Money in the Bank. After a little over 11 minutes into the match, Alexa Bliss, who won the MITB briefcase earlier in the event. This would spark the feud between Rousey and Bliss, as Rousey felt that her opportunity to become champion was ruined by Bliss.

At the 2018 SummerSlam event, Rousey culminated her feud against Alexa Bliss, challenging her for the Raw Women’s Championship. Rousey’s MMA background made her the clear physical favorite, but the wily in-ring ability of Bliss ? who is a five-time women’s champion ? kicked into full gear during this match. However, in the end, Rousey came out the match as the victor and commenced her reign as Raw Women’s Champion.

In 1985, Vince McMahon started the WrestleMania series. Over the years, names such as Hulk Hogan, Shawn Michaels, The Undertaker, Steve Austin, The Rock, Triple H, and John Cena have been pillars of this event to make it not only the biggest show of the year in WWE, but is now compared to the major events on MLB, NHL, and NFL.

This year, the first women Main Event occurred in the history of WrestleMania, by way of a winner-takes-all triple threat match for the Raw and SmackDown Women’s Championship. The participants of this match included Ronda Rousey, “The Man” Becky Lynch, and Charlotte Flair. Lynch won the match, becoming champion of both brands.

While Flair and Lynch, as well as other names such as Sasha Banks, Nikki Bella, Paige, Bayley, and Natalya were pivotal in forwarding the women’s division, even Vince McMahon admitted that Rousey contributed to pushing it to the WrestleMania main event level.